END_OF_DOCUMENT_TOKEN_TO_BE_REPLACED

Whether it’s surging cryptocurrency prices or booming demand for Non-Fungible Tokens (NFTs), blockchain-related stories are big news today. However, behind the hype is a genuinely significant but still-underestimated technology. However, that is changing quickly.

Blockchain is an incorruptible digital ledger used to store data and record transactions. Historically these transactions were financial but today blockchain can store almost anything digitally, such as contracts, public records, and even digital art.

Data, stored in connected blocks across multiple computers, cannot be altered or changed. The information stored on this ‘chain’ is verifiable, validated, and unforgeable, which is why it’s been so prominent in payments innovation over recent years.

Away from payments, blockchain already has multiple benefits like security, transparency, and productivity. These traits are all crucial not only for businesses and industries, but consumers. That is why, at Labrys, we are so excited about the technology’s long-term potential.

What are the benefits of blockchain?

The benefits of blockchain can be applied to multiple industries, and we’re seeing a significant increase in the variety of businesses – from governments and enterprises to startups and individuals – engaging us for blockchain solutions. Not only is demand increasing, but the size and scale of projects too.

One core benefit is transparency. Consumers today are becoming far more conscientious. Many consumers, for example, will only engage with businesses who have ethical and sustainable practices. Through the incorruptible nature of blockchain and the data it holds, you can be certain that a retailer is actually using recycled materials, or that an energy provider uses legitimately renewable energy rather than just saying they are.

In much the same way, security is a huge benefit, too. By creating a record that is encrypted and can’t be altered, blockchain helps prevent fraud. And because information is stored across a network of computers rather than on one server, it becomes incredibly difficult to hack.

Through automation, and the inherent transparency and security, blockchain can also be a driving force for streamlining long and laborious processes. In the UK, for example, recent blockchain pilot programs have streamlined the process of buying a property from roughly three months to just three weeks.

Why is the industry so excited?

It’s examples like this that have the industry so excited. While many people still only understand blockchain in the context of cryptocurrency, it’s potential is endless. It remains a relatively young technology, but on an almost daily basis we’re seeing new and innovative ways the technology is being used to change the way we live, work and play.

From revolutionising payments and improving supply chain transparency, to boosting security and streamlining the purchase of a house, these practical blockchain applications aren’t generating the headlines as NFTs or bitcoin, but their impacts will soon be much greater. 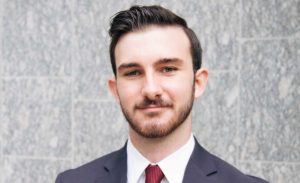 Lachlan Feeney is the Founder and CEO of Labrys – Australia’s leading provider of blockchain development and consulting services. Lachlan founded Labrys out of his bedroom at the age of 19. He was an early adopter of cryptocurrencies and blockchain technology and immediately realised the potential to build a better, more democratised future, with the technology.

Labrys has worked with ASX listed Downer EDI, The Government of the Solomon Islands and global blockchain platform NEM Group, among others. Lachlan is on a mission to turn Labrys into a global blockchain-consulting authority as the technology moves further into the mainstream.

Prior to starting Labrys, Lachlan has worked as a developer at fellow blockchain agency; Civic Ledger and as a cryptocurrency researcher at the Student Trading and Investment Association. Lachlan is also a co-author of The Handbook of Board Governance (2nd Edition).