END_OF_DOCUMENT_TOKEN_TO_BE_REPLACED

Ask yourself this question – what’s the difference between a gimmick and a revolution? When John Logie Baird demonstrated the first television in 1925, at first it was something of a gimmick. Nobody would have guessed that, even a century later, the device would have revolutionised news and entertainment all around the world.

When a mobile phone the size and weight of a house brick was introduced in 1985, people thought it was a rich man’s toy. Who would have thought that less than 40 years later just about everybody in the developed world over the age of 16 would be walking around with a computer in their pocket? More to the point, a device that could give them a voice connection to anywhere in the world, not to mention access to terabytes of data and knowledge.

So, when Satoshi Nakamoto invented Blockchain in 2008, did he create a short-lived gimmick, or an enduring platform for decentralised finance that would change a global legacy of money, commerce, and finance, dating back 2,600 years when the first coins were minted?

Today we live and breathe and experience technology 24 / 7 / 365. It’s something that enables things – news, communication, entertainment – to work better. And that’s how we believe you should see the world of cryptocurrency. We think it’s a better way of managing all things finance.

So, the brief answer to the question in the headline is ‘totally and irreversibly’.  At some stage, the world will stop using fiat currencies based on central sovereign banks and make every transaction in one, or another, global digital currencies. We have already seen during the pandemic that cash is going out of fashion – digital payment is rapidly becoming the preferred method of payment, increasingly through the concept of mobile ‘wallets’.

Once the mind makes the cognitive jump from having notes in your purse and small change in your pocket to passing a piece of plastic or a mobile device over a Bluetooth terminal, it ceases to matter what currency you have in it. That’s at a personal level. At a commercial level businesses hate cash – it costs them time and money. Businesses far prefer digital payments.

In terms of global enterprise, multi-national businesses are already heavily investing in ‘crypto’ because it makes enormous sense. If you sell things to Vietnam and get paid in Vietnamese dong, what do you do with the dong? To repatriate the funds somebody has to pay the costs of currency conversion. Agree a price in cryptocurrency and you have one seamless transaction with no conversion costs.

Which brings us back to Blockchain. Here the thing to ask is not ‘how does Blockchain work?’ Rather, the question is ‘what does it do for me?’ The simple answer is it keeps every transaction secure at a military grade level by recording every transaction, every step of the way. What’s not to like about that?

Cryptocurrencies are already changing global finance. Visa, Paypal, and Mastercard are involved, global businesses are buying digital coin, some of the world’s largest asset managers, such as Goldman Sachs and Blackrock are seeing it as an additional asset allocation to clients’ portfolios.

Mostly they are buying ‘Blue Chip’ coin – Bitcoin, Ethereum or Litecoin. Each has a different profile and, as in every portfolio, they are looking to mitigate risk by diversifying amongst the three.

However, Nakamoto unlocked Pandora’s box when he invented Blockchain and introduced Bitcoin. Today there are thousands of ‘Altcoins’ and other tokenised assets on the market. At Dacxi, which is predominantly a ‘buy and hold’ wealth accumulation platform, rather than an exchange for day traders, we bundle together coins for investors looking to add an allocation of crypto to their portfolio. Currently we offer a Blue Chip bundle of Bitcoin, Ethereum, and Litecoin, and for those wanting “up and coming” altcoins, a Blue Ocean bundle comprising Polkadot, Chainlink and Stellar.

To see the traditional banking world, concede that crypto is here to share brings me great joy, with a touch of “I told you so”!   To quote from a recently published (May 21st) Goldman Sachs white paper:

‘We’ve now hit a critical mass of institutional engagement in crypto. Everyone from major banks to Paypal and Square is getting involved – a loud and clear signal that crypto is now an official asset class.’ 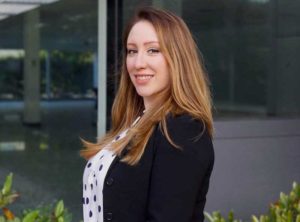 Katharine Wooller is UK MD of Dacxi, a cryptocurrency wealth building site where investors can start to build a portfolio in coin from as little as £100. For more details see https://dacxi.com/buy