END_OF_DOCUMENT_TOKEN_TO_BE_REPLACED

Cryptocurrency seems to be the buzzword we are hearing lots about. Ross Thompson, Programme Team Leader at Arden University discusses why this is the case by fleshing out the importance of blockchain and how it relates to cryptocurrency.

A blockchain is an encrypted distributed ledger system that can be used to enter, verify, store, and retrieve transactions.  Unlike traditional, centralised ledgers, blockchain systems use a network of independent computers (nodes) to manage these transactions.  Transactions are entered on the network in time stamped and linked blocks by a network of super-nodes based upon a consensus algorithm.

The advantages of blockchain over traditional systems

As records are kept on multiple computers, data security is enhanced with blockchain.  Data losses from theft, fires and catastrophes are greatly reduced and it is virtually impossible to delete or tamper with the records.

Blockchain also promotes transparency, by allowing all participants to have relatively unfettered access to their records. It also manages transactions diligently and swiftly, reducing the time spent on intermediation  – such as with insurance transactions; It potentially removes the need for intermediaries and is a true peer to peer system.

How blockchain relates to cryptocurrency

Blockchain systems can support token systems or currencies such as Bitcoin, Dogcoin, Ether, Ripple, etc. A cryptocurrency is a form of payment that can be exchanged online for goods and services.  Blockchain can be used to support publicly available cryptocurrencies such as the Bitcoin or also private ones – several individual corporates or alliances are already using or conducting research to use the blockchain in this way, for example, using “student coins” in universities.  Nationwide supermarkets such as Tesco, Sainsbury’s and restaurants including Just Eat and Deliveroo are now accepting bitcoin as a way of buying a gift card via Bitpay, for instance. On the other side of the pond, AMC, Amazon and Tesla have expressed interest and future plans to embrace crypto.

Crypto also potentially eradicates the needs for banks and other intermediaries which is why in the future, we may see banks creating and using their own cryptocurrencies to stay somewhat relevant.

Despite all the uncertainty around blockchain and crypto, we are still expecting to see a shift in its use. More than 10,000 different cryptocurrencies are traded publicly with many wanting to invest now before they become widely used, popular and most likely more expensive.

Blockchain, and therefore cryptocurrency, has a lot of potential and can infiltrate a variety of industries outside of banking and finance – from the property market to higher education institutions. The transparency and speed of blockchain can, for example, streamline property transactions – which often include copious amounts of paperwork and reduce possible fraud, and errors in public records. 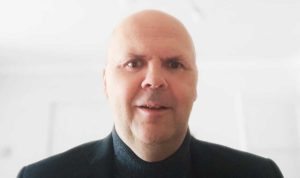 Ross Thompson is an experienced academic and management consultant, and he has held several senior roles in finance and marketing.  A qualified company secretary, his research and consultancy interests encompass blockchain, graduate employability and corporate strategy.